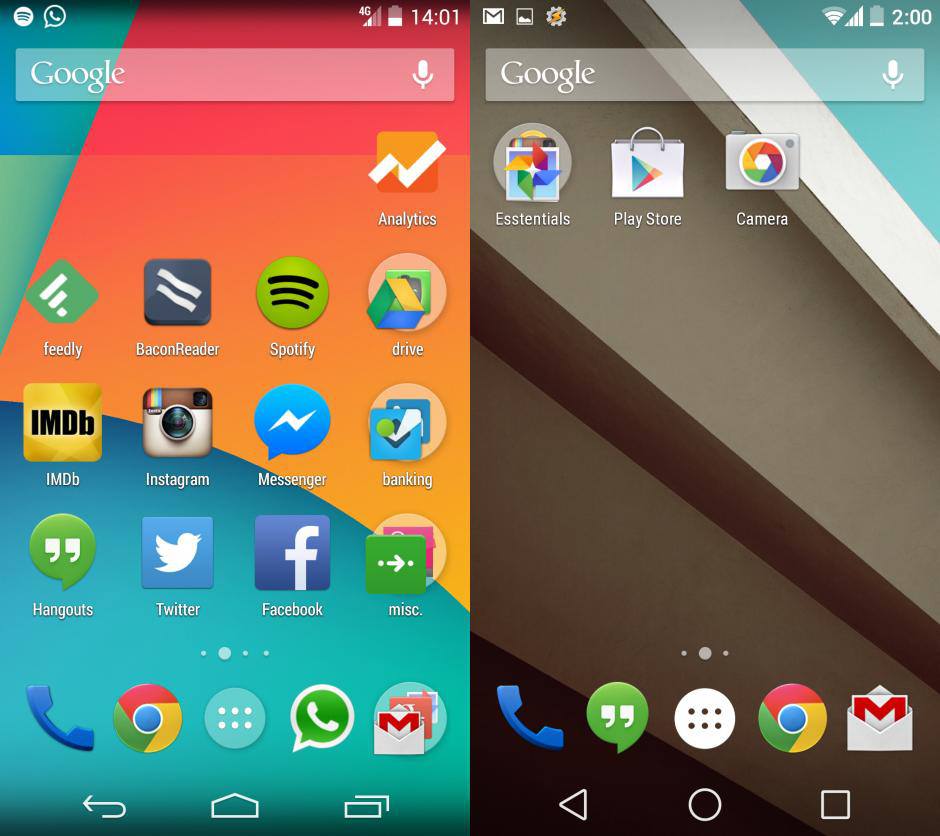 Android has matured a lot with its new version that brings it up to an integer – 5.0, also known as Lollipop. The new version has been improved a lot, with a series of features sweetening the mobile users’ experience. But how does it compare with its chocolaty predecessor, Android 4.4 Kitkat? Let’s take a look. Lollipop vs Kitkat

The new visual style of the new Android is the most obvious change since 4.4. Android’s Kitkat was already flat, but with Lollipop Google adds a bit more sweetness to the recipe by introducing real time shadows cast by the elements on screen. This, together with the improved animations, give Lollipop more depth, more dynamic and more realism. This is what Google calls “Material Design” – a new design paradigm intended to make Android look more unified, from navigation buttons to notification bars.

The new Android version comes with a much smarter and efficient notifications system, designed not to interrupt whatever the smartphone user is doing. No more lost games due to an incoming call – whenever you are knee deep into something and somebody decides this is the perfect moment to call you, you can decide whether to answer the phone or ignore the call and keep playing.

One of the features I like the most about the new Android is its “Do Not Disturb” mode, which helps you filter out work related emails, phone calls and text messages outside business hours, except for those added to your allowed list – a handful of contacts that, when they want to contact you at that time of the day, you want to be in contact with. A nice way to help separate work time from me time, if you ask me.

Android’s new Lollipop will also add some important minutes and hours to your phone’s battery life. It will have the new Project Volta working under the hood to allow developers identify which elements of their apps use the most power, and improve them from this point of view. Besides, Lollipop will sweeten the deal with the new way of scheduling unessential network communication to be done in certain circumstances only – say when your phone is on the charger and uses WiFi (like when you spend some well-deserved minutes of rest checking out why Red Flush Mobile Casino currently has a selection of the best mobile casino promotions).

Recommended Read: How to Record Phone Calls on Android Devices

And last, but not least, the new unlocking system of the Lollipop that will make your phone deserve to be called “smartphone”. On one hand, the phone will have the front camera permanently watching, and when it recognizes your face, it will unlock the phone without the need of a PIN code or something similar. Plus, when the phone will recognize the home environment – familiar WiFi, Bluetooth devices or familiar noises, it will also not need to be unlocked. This can save you considerable amounts of time, especially if you look at your phone zillions of times each day.