HomeAppsGoogle Device Assist - Improve the performance of your device
Apps

Google Device Assist – Improve the performance of your device 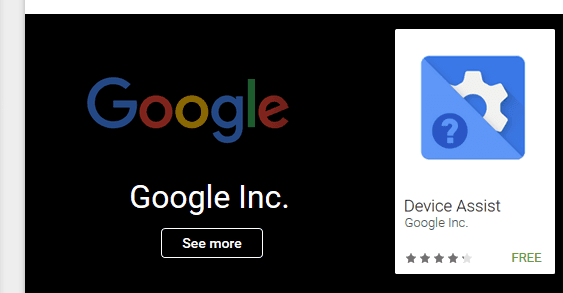 Most of the Android Smartphone users are the Google lovers, Some people prefer Android Phone as it was made with the support of Google. Android is like a child for Smartphone user which is 7 years old and has reached a big consuming audience. Android users came across a long 7 years exciting journey with a lot of useful apps and fun games in the SmartPhones and Tablets world. So far we are in the destination named as Marshmallow which is sugary and tastes good as we have a lot of awesome features for the new Operating System. 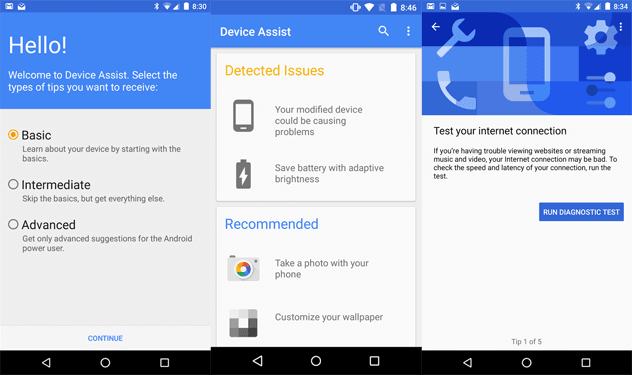 But this is not the actual destination for Google, Google inc. is making a great way to the next destination named as Android: N. So the new and next destination is not yet confirmed and the name is unknown. As per Sundar Pichai (CEO of Google), the name and the release date of Android: N will be revealed in the next Google I/O. For now before flying for the next Android destination, Google is making some cool and awesome apps for their precious customers. So we have a new app called as Google Device Assist.

Still now we have some preinstalled default apps by Google in our Android Devices. But as Google Device Assist a new Android app, it was not yet preinstalled in any Android Devices. The main reason for developing this app is to create a better troubleshooting experience for the android user with a good interaction with the user. We can expect that the upcoming Android devices will get this app preinstalled while getting it out of the box. This new app will frequently scan your device for any type of non-function or other issues to get it noticed by the user and will assist you to fix it without further problems.
It seems that you are now cleared about this app as I mentioned above, in simple words, this is an excellent interactive troubleshooting and Assistant app. So let’s get it even closer to knowing what Google Device Assist does to your Android device.

Google Device Assist – features and what can we do with it?

As you know Google will always do the best User Interface for their apps, in that way the developer did a great and easy UI for Google Device Assist app with a Hello! screen. The Hello! screen will show you three selection levels for users. The three levels mentioned as Basic, Intermediate, and Advanced. All the three levels have the same option in general, but you can select as per your experience with your Android device. I mean if you select Basic level then you will get a lot of tips to improve the performance of the Android phone. If you have tips and subtitles, then go for the Advanced level user option.

So after the selection screen, you will get into the main menu screen to monitor the device and look for problems to make things work properly. The first screen will pop up some serious problems causing things to eradicate from your device like over storage issue and some app or stuff which overrides your CPU and RAM memory and leads your device to overheating and restarting issues.

This app is also having some interesting troubleshooting stuff like checking the internet speed, detecting battery, GPS & connectivity issues, and then allows you to test your device screen which will show problems regarding dead or stuck pixels on your display.

At the conclusion, you need to know that this app only supports Android 5.0.X and later version of ROM. It doesn’t matter if you are using a Stock version or AOSP (Android Open Source Project) based custom made ROM’s, All you need is a Lollipop or the later version ROM’s to run this app. So you came to know that if you are using a KitKat or Jellybean based ROM then you can’t have this app in your device working.

So keep visiting our blog and like our Facebook page to get frequent good updates from our Android Mania team.  🙂 Have a nice day.