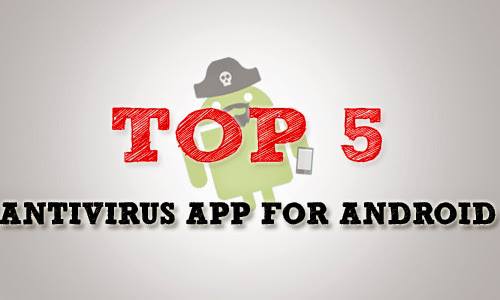 It is fun being able to add security to your Android because it makes you presume you have important information on there. Most people are just sad to lose their photos and phone numbers, but that sort of thing can happen if your phone is left in the rain. Still, if there are threats for your Android then it is better to prepare for them. Here are 5 popular antivirus for Android Device.

This one has been around for quite a while, which is one of the reasons it has pie eyed friendly fans ranting about it online because they think it is the best thing since someone decided to put jam on a slice of bread. With this tool you get a free version and a paid version. The paid version has extras such as helping you find your phone if it is lost, and the paid version happily tells you if you have a virus but then spends the rest of its time laughing at you because of it and shaking its “pay to remove” knickers at you.

They have a paid version alarm which is supposed to go off if you tell it to, ideally in the arms of the robber who took your phone, and there are things such as privacy reports you may want to try. It does scan for and remove viruses and help to protect against hackers. You will find it easy enough to use because it doesn’t seem to do much. It is lacking an abundance of bells and whistles (extra stuff).

This is a free app that has been running for a long time, and every now and again will come out with a big bold claim that is supposed to knock the socks off of the online community. That is why there are a lot of congenital idiots walking around with cold feet. But, it is a free program that adds security. An Android with the program is better than one without, so on that merit you may want to give this app a go.

This is a program that will help you detect and remove viruses. It has a free version for people who have nothing to lose on their Android, and a paid version for people who have naked pictures on their Android. With the free version you get the fun stuff such as scanning for threats, scheduling and such. With the paid version you get to have a few of your threats removed and it does a little better in trying to protect you from physical/local threats as well as online ones.

This is a free app which is never a good sign, but one has to assume that somebody out there is kind and yet dumb enough to spend hours of productive time making something to then give it away. Free things always suggest that maintenance is an issue, therefore there will be none. But still, nobody is asking you to get into bed with Avast. You can use it until people start complaining about it, just like using a hair dresser up until the point people start laughing at your head in the street.

Avast does what most other security apps do, and there is an argument to be made about the fact that even if an app is free, it is still adding layers of security that stops viruses and hackers getting in. In that sense, even if you were using bales of hay piled against your house in order to stop burglars, you have to admit that it is at least going to slow them down a little unless the robber is a hungry horse.

This is one of those annoying antivirus programs that is very lightweight and yet very good at picking up on viruses. It is as if the other programs are padding their routines and this one just slides in and picks out the nasties without fuss or mess. It picks up on viruses very well and it is free. It makes you wonder what the other programs are doing if this can pick up on most viruses without having to bulk up the program and they can afford to give it away free.

It makes you wonder if the company is not actually the one creating all the viruses so they can claim they have a very high detection and removal rating. It is streamlined and you can scan in real time.