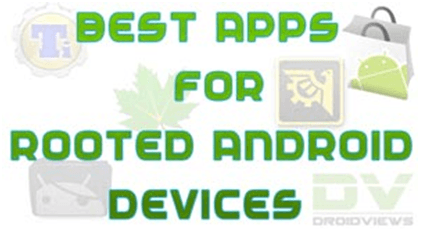 Android users are tempted to root their device and customize their phone or tablet in the way they want. Users need to root it properly and take full advantage of using that rooted device. Many of the users don’t know about the rooting, it is recommended for everyone to check the android rooting guide before rooting the device, because if something went wrong in the process there might be a risk of losing the data. So it is necessary to learn how to root the device. On the other side for those, who have all ready rooted the device, there is a list of apps that re top in the category and root users must download these apps. Have a look at the below listed apps for Rooted Android Devices.

This app is a one single app to download and install anything you find on the goo.im. It has an ease of user interface and will help you find lots of files that you search same on the Google search engine.

This is a useful for all the game players. This app allows you to synchronize all your data using wifi connection between the android devices. Example- While you are playing a game on your Android phone and you want to switch the game to the tablet, you sync data using this app and it will allow you to play on the a tablet where you last at on your phone. You can unlock the feature of synchronization using Bluetooth and NFC in the premium version.

ROM manager helps you to take the backup of your existing ROM and also install custom themes. The app comes with the list of all featured ROMs that you can install or take backup on your SD card. In the premium app you can download the premium latest Rom versions and other features like notifications and automatic updates.

Greenify is an app that will speed up the device by hibernating or stopping the unnecessary apps running in the background. Remember, the app is not like the task –killer, instead of stopping the app it only hibernate the app, So that next time when you open the app you start it from where you stopped the game last. Also, the app suggests you which you are not using. This app is free in Google Play.

Titanium Backup ranks on the top and is the most useful app for every root users. For those who are new to rooting, Titanium Backup is the most essential app for dealing with your backup of the phone fully. This app allows taking the backup of app data and saving into your SD card or cloud storage for later restoration. With this app you can take the advantage of full backup from SMS messages, apps to bookmarks, call logs and everything.

GMD can be proved to be useful for a phone but more for the tablet users. It allows users to assign certain gestures for performing some tasks. Example you can swipe left or right for going to the last opened app or shake the phone to change the new songs etc.